In my previous post, I share about the Pearl of a Girl who was added to our family strand almost a year ago. Just as I looked up the meaning of Megan’s name, I continued on and looked up the meaning for Drew. Of course our Drew’s full name is Andrew.  Here is what I found; Drew has a Welch origin. The short form of Andrew and it means “wise.”

In raising Drew, I was faced with many challenges that come with raising a boy. Grass stains that magically jumped up on his pants as he would explain why his good pants had stains. Loud noises and sometimes rude noises that I would immediately attempt to put a stop to. And, then there were things Drew would say out of the blue that would make Jim and me realize that he was sometimes wise beyond his years and sometimes actually knew a little more than we did. Yes, challenging!!

Drew was the type of child where Jim and I would have to draw straws to see who was going to do the punishing when Drew did get into mischief. You see, Drew had a way of looking at us and breaking us as we were attempting to correct/lecture him. One of us would have to do the confrontation/punishing while the other was in the other room with their face buried in a pillow laughing while it was all going down in the other room.  Drew had and still does have a quick wit and tongue.

Yet, Drew has always been a child that Jim and I have great admiration for. He is always calculating, analyzing and researching before he makes any decision. For example, Drew did not actually start walking on his own until he was about twelve months old. However, we knew he could walk at six months. The reason we knew he could is because you could give him the thinnest  of thread to hold on to and he would walk. Yet, he had to have it perfected in his mind before he would reveal that he actually knew how to walk.

We have watched Drew make life decisions in the same way. He would bounce a thought our way to see what input we would have but then would not pursue the issue as far as we knew. Yet, all the while Drew was gathering facts, and information to make the best decision. He did this as he prepared to start his career life in Chicago, as he moved to Atlanta last year and as he made he most current move to the DeMoss Group.

Jim and I have a lot of respect for our son, Drew. He reminds us so much of Jim’s dad.  Jim, Sr is the type of man where people seek his advice and value his opinion. He is a man of wisdom.  They are both kind of like the old commercial that was on years ago; “When EF Hutton speaks, everyone listens.” Jim and I are proud of all of the decisions that Drew has made through the years. Yet, the decision to marry Megan has to be one of our proudest out of all of his accomplishments. It was only after a few visits with Megan that we knew that Drew was calculating something far more than a friendship. He was looking ahead at  a life-time friendship, relationship and partner to walk with him the rest of his life.

Drew getting ready to propose to Megan

Just as I looked up scripture that went with Megan’s name, I did the same for Drew. “Have I not command you? Be strong and courageous. Do not be terrified; do not be discouraged, for the LORD your God will be with you wherever you go.” Joshua 1:9

Jim and I know that in ALL  the decisions Drew has been faced with that he has faced each one with confidence and great courage. He is a man who walks with God each and every day. It is because Drew has exemplified these characteristics over time that we know without a doubt that he will always watch and do what is best for his family. Most importantly, Drew will do everything it takes to take care of his “Pearl of a Girl”, Megan. Yes, Jim and I consider Drew a very ‘wise guy.’

Drew had just popped the question!

One year ago today, Drew pulled off the ultimate mission of surprise. This mission was  to surprise you with a visit and to propose to you.  Needless to say, Drew had us involved to pull off this covert affair of surprise. As we helped Drew prepare for this mission, Jim and I both were so very excited and could not wait for the evening of surprise to unfold.

Jim and I sat in Barnes and Noble awaiting for the “official” phone call that the mission had been completed and all was a success. When we received Drew’s call that all had gone well without problem, Jim and I were excited to know that we were getting a new addition to our family by the name of Megan. I am amazed that we didn’t jam the phone towers and signals with all of our phone calls and texts.
Megan,  I have prayed for you over many years.  My prayer was that God send Drew a Christian girl who was raised on the same value system as Drew. Along with this prayer, I prayed that this girl God would send would love Drew with all of her heart.  Needless to say, my prayer was answered when he put you into Drew’s life. Though this prayer has been answered, I continue to and always will pray for you asking God to hold you tight in His arms and giving you all that you need each and every day.

When I first met you, I knew you were the one for Drew.  It was the way you would smile and look at Drew that told me that you were ‘the one.’   Then, I knew you were definitely the one when I saw how you could stand toe to toe with Drew with his sarcasm and wit. Just as Drew knows how to zing, you seemed to know how to have a come back.  Only  a few can pull this off and you seem to do well at this task.

This summer you will officially become our daughter-n-law. But, Jim and I see you as becoming our daughter.  We grow to love you more and more as each day passes.  You add that special spice to our family just as special spices add to a recipe. Today, as Drew and you celebrate one year of being engaged, know that Jim and I both are very proud of the both of you. Along with your celebration of being engaged, Jim and I are both excited for you just as we were a year ago. In the words of Emeril, over the year that excitement has been “kicked up a notch!”

We Love You,
April and Jim 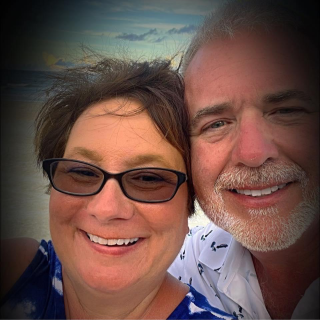